On this property in Fieldton, TX the owner noticed that large amounts of water were collecting near her back door and the area nearby due to the lack of a gutter system. Every time she would walk outside after a storm there would be water puddled in her walking path increasing her and others chances of slipping or getting hurt. The homeowner wanted gutters for safety reasons and to preserve the lifespan and integrity of the foundation of her home.

Fortenberry Roofing was who she chose to call to get an estimate, and who ultimately provided the service of installing gutters to her home. As Robbie inspected her house for the estimate, he saw that there would be an obstacle due to her back deck. He would need to make a plan to install a downspout on the side of the house from the gutter attached to the roof, but instead of the downspout draining onto the deck, it would need to be installed through and under the deck to an area better suited for the excess water.

When it came time for Fortenberry Roofing's gutter installment team to install the downspout near the back deck, they were able to come up with the perfect solution. They were able to cut out a piece of the deck in order to run the downspout through it. Once the downspout was installed, two downspout extensions were added to match the length of the deck. When the extensions were installed, the gutter team then reattached the piece of deck they had removed back into its place making it look seamless and untouched.

After everything was said and done, the owner of the property was highly satisfied with the work that Fortenberry Roofing was able to perform. Since her new gutters were installed, she feels safer and her walkways are more dry and accessible after heavy rains.

The area of the deck that had to be removed in order for the team to install the downspout and downspout extension under the deck. 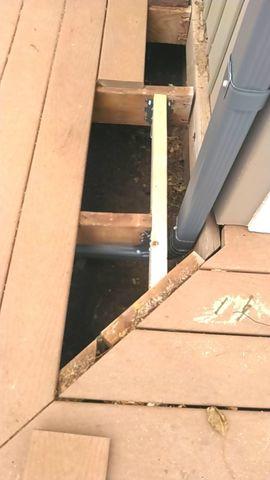 After the downspout and down spout extensions had been installed.

The piece of deck that was removed, was reattached once installation of the downspouts were complete. 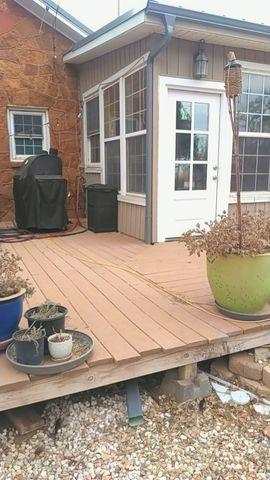 The final outcome of the downspout once installation was complete.

We serve the following areas